Born in New York in 1804. His wife Susan HULSE was also from New York according to US Census records. The 1850 Census has them farming in Sheshequin, Bradford County, PA. as does the 1860 and 1870 census'.

I received an email and attachment from Laura Palmer Hooker on February 27, 2015 who is also a descendant of David and Susan Heavener.  She descends through a daughter, Phebe, who was unknown to me as she married John Palmer prior to the 1850 US Census.  Laura also included a copy of the Pennsylvania certificate of death for Charles A. Heavener, son of David and Susan.  The certificate lists Susan's maiden name as HAULTZ, however Laura states the correct name is HULSE and she is the daughter of Samuel HULSE b. 1785.

I appreciated being contacted by Laura and have included her data in this update to the site.

The children of David HEAVENER and Susan HULSE:

Note: All names in MAROON are direct line ancestors 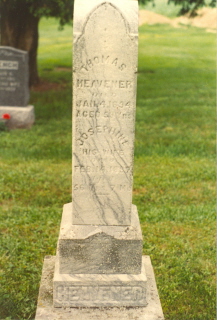 Enumerated in the 1910 US census, age 66 years, single, occupation was farmer. 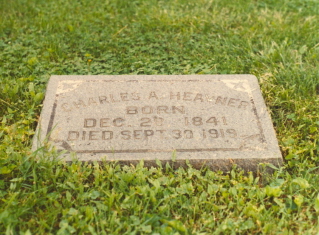 Born in Pennsylvania on May 28, 1838. About 1860 he married Sarah Dorleska FRENCH. She was the daughter of Walter FRENCH and Sarah "Sally" ROGERS.  According to the US Census records, all of the children were born in Sheshequin, Bradford County, PA.

On October 28, 1864 he enlisted in 162nd Regiment, 17th PA Volunteer Cavalry.  According to the unit records he was a farrier, and was mustered out from Company L, 2nd Regiment, PRO Calvary.

Samuel M. returned to farming after the Civil War and the family grew.  He died on January 13. 1876 leaving Sarah with a young family to care for. Sometime before 1880 she married Elias Bradford BALL (his wife had died on April 25, 1878). Three of the HEAVENER children (David, Walter James, and Myrtie) appear on the 1880 Census enumerated with Elias and Sarah.

The obituary in the May 21, 1909 issue of The Waverly Free Press and Tioga County Record states Sarah died on May 14, 1909, at the home of her daughter, Mrs. N. V. Weller, on South Main Street, Athens, PA. She is buried in Sheshequin Valley Cemetery along with Samuel M. HEAVENER.

The children of Samuel M. HEAVENER and Sarah Dorleska FRENCH: 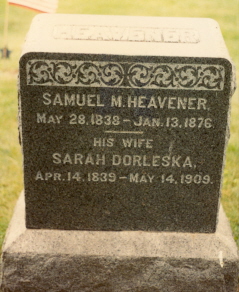 Last found in the 1910 census in Sheshequin, PA.  He is listed as a farmer and is enumerated with his wife, Catharine, and son Franklin. Franklin lived in Portland, WA in his later years. 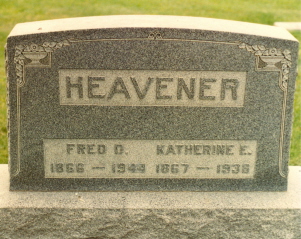 Born in Sheshequin, Bradford County, Pennsylvania on December 26, 1871. He married Ruth H. SHELDON about 1897. She was the daughter of Daniel Lane SHELDON and Saloma PRATT of Springville, Susquehanna County, PA. 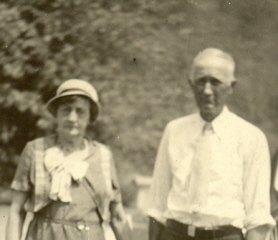 Walter was initially in the Lumber business and moved to the Scranton, PA area shortly after their marriage. 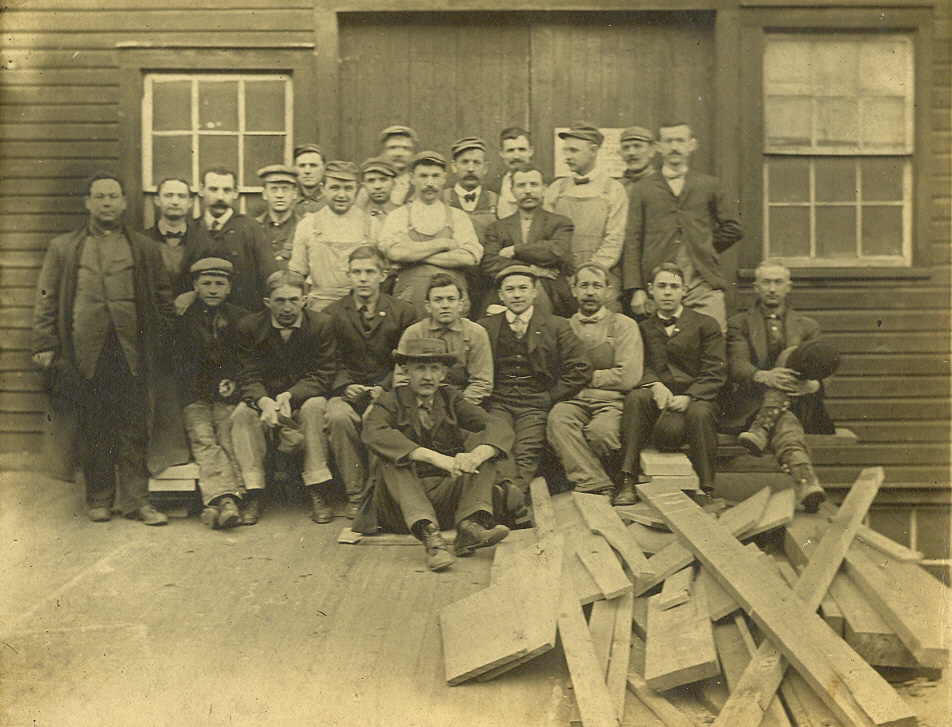 Between 1901 and 1909 they moved to Lymanville, PA and are enumerated in the 1910 census there.  The 1920 census finds the family, without daughter Leatha, in Lemon Twp., Wyoming Co., PA. The family moved to Johnson City, New York late in 1920 and lived in a house on Oak Street in the Oakdale area. Walter James and Ruth lived in the surrounding area until their deaths. Walter James died in 1939 and Ruth H. died in 1947.

The children of Walter James HEAVENER and Ruth H. SHELDON: 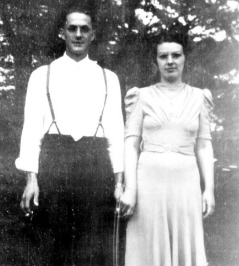 Born in Scranton, PA on August 21, 1898. He met his wife Genevieve Beatrice WHEELER when the family moved to Johnson City, NY area around 1920. She was the daughter of Hayes Rutherford WHEELER and Mary Ann WILSON. Walter and Genevieve met at home as the Heavener's and Wheeler's had apartments in the same house. 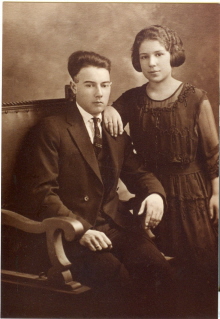 The family lived in Johnson City all of their lives. Walter Sheldon retired from Endicott Johnson after many years of service which allowed him to devote more time to his second profession, bee keeping. Walter Sheldon maintained many hives in the immediate Broome County area. He collected and processed honey which was distributed throughout the Triple Cities. He was also known to make "house calls" to remove a swarm of bees at an anxious home owner's request.

The children of Walter Sheldon HEAVENER and Genevieve Beatrice WHEELER:

(* individual is still living, therefore, no information will be published) 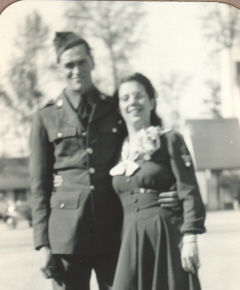 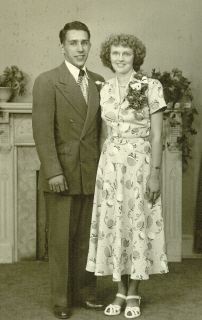 Buried on the former family farm located on Snyder Road in Sheshequin.

Walter was a Susquehanna riverboat pilot for several years transporting timber, beet & elderberry wine, vegetables, and other goods down river.

Both born in New Jersey.  Were married 28 May 1797 in Sussex County, New Jersey.  Family came to Sheshequin area in 1823 settling in Ghent.

A special thanks to "cousins" Jeff and Ethel French for their website - www.suvcw-frenchcamp.org/Frenchreunion2010.org/ 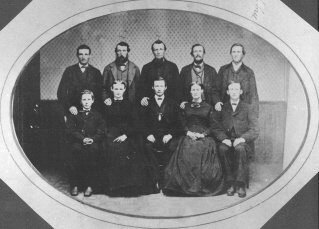 The Ancestry and Descendants of John Pratt of Hartford, Connecticut by Charles Whittelsey, Pub 1900

He wrote a letter to his wife Saloma on April 30, 1863 while stationed at Fort Mansfield, Deep Creek, VA. which is in my possession.  The letter starts with normal talk between a husband and wife, but changes to a condemnation of the officers of his unit for their treatment of the men in the unit .

James was a Lieutenant in the Continental Army during the Revolutionary War.  He was home on leave when he was killed by Indians during the Wyoming Massacre on July 3, 1778.

Hannah and the remainder of her family were freed by the invading forces and forced to evacuate, They return to Connecticut suffering many hardships along the way.  Hannah and the family returned a few years later.  She died in Wyalusing at the home of one of her sons in 1795 and is buried there. 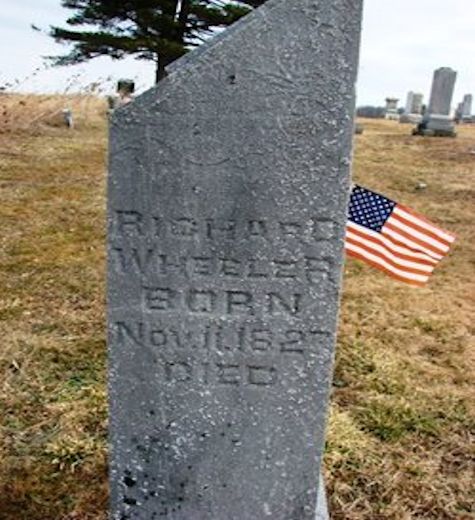 Richard enlisted for three years on March 22, 1864 in Co. H, 57th Regiment, Pennsylvania Volunteers. He was wounded on August 21, 1864 at the battle of the Wilderness in Va. (lost right thumb). He was discharged on August 23, 1865 with a Surgeons Certificate of Disability.

The relatives and descendants of Genevive Beatrice (Wheeler) Heavener

Gavin and Gavin Jr. appear in the 1930 census enumerated with daughter Clara and her husband  James GORDON in Luzerne Town, Luzerne County, PA.  Also with them is a cousin, David SPENCE.

Genevive Beatrice (WHEELER) Heavener and her descendants listed above.

If you have questions, corrections, or additions for any of the information listed on this site, email me at